Even if you write tests and those tests are perfect, effective and everything you will face production issues. Sometimes everything will just crash and when that’ll happen you’ll need some debugging skills. Here I’m putting some flow examples, notes and resources around post-mortem debugging of Go programs, including, but not limited to, those running inside a Kubernetes cluster.

I’m a huge fan of GDB, I used it for almost a decade now and while I remember it was a bit clunky and difficult at first but it got better in the years and in the meantime I got used to it and it’s commands and perks.

A few years after my first gdb, I saw Delve and had the same feeling: it was clunky, and it had nearly anything I needed. Now, after a couple of years Delve seems pretty complete and it just works, one thing I really like about Delve is that even if the terminal interface is similar to other debuggers (like gdb) has a very well done UX, for example:

This is the current execution point of a program under Delve:

This is how the same thing looks like in GDB

However, one could extend GDB by customizing .gdbinit like how the GDB Dashboard does: 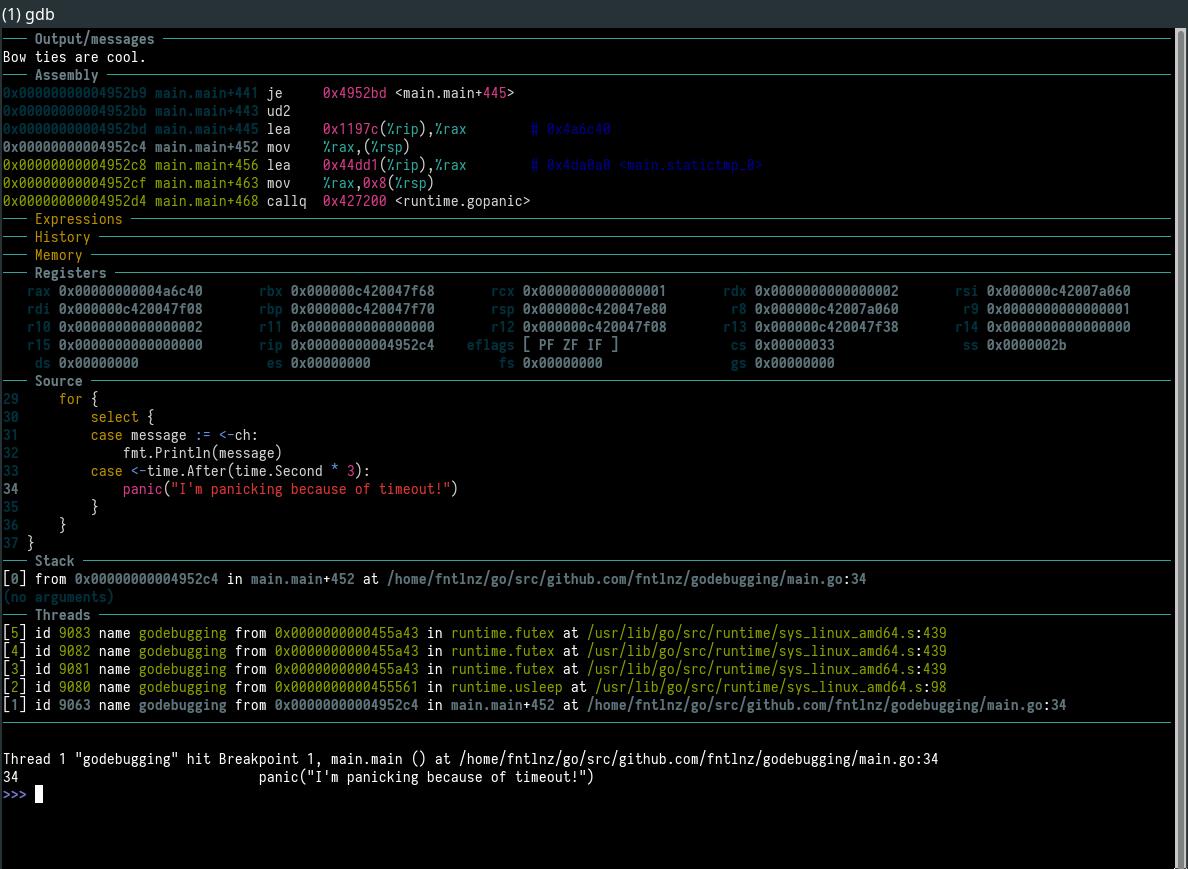 A part from the UX, Delve has several advantages over GDB when debugging Go:

On the other hand, GDB has still some advantages over it:

So, how to say, I’m not very religious about the debugger I use but generally when I need to choose Delve or GDB I just go with Delve and then if Delve breaks I try with GDB. It’s not very scientific but it’s a wise way to proceed.

I will show a few examples:

Proceed with the Autopsy

When you do an autopsy over a crashed Go program there are two things you need:

To get a core dump, the first thing you do is to check the maximum file size for a core dump file

If it is zero, you are not core dumping so you need to raise the limit.

Also, when debugging, you have to remember that the Go runtime can be said to trigger certain behavior that can make debugging easier. In this case, we are interested to say the Go runtime to trigger a core dump by actually doing a segfault instead of just exiting in case of panic.

To do so, when we run the Go program we need to run it with GOTRACEBACK=crash like this.

There are also other environment variables and behaviors for GOTRACEBACK, if you want to discover more take a look here.

Now that your system can core dump you need to restart the program and wait for it to crash.

You can obtain the core file of a running program using gcore, see man gcore for more info.

In my case it is using the systemd-coredump program to write files, and I get lz4 compressed files like this:

Generally speaking when a Go binary is built for production most of us will use something similar to:

Semi OT: if you are a digger, read this blog from Dave Cheney on what the Go build command does, you’ll see a few interesting things.

The good news is that we can analyze a core file with a binary built from the same source code, this time without those ldflags.

I don’t own the code

But in case you don’t have or own the source be aware that without a symbol table we can’t debug a program with Delve so with gdb and some Assembly skills you can use gdb to use the binary you have with the core file you got from the production system, then you can start analyzing what happened:

The first thing I did was to use the bt command to analyze how the backtrace looks like, and then I showed the next 30 lines of Assembly with:

All this is not very useful unfortunately but in case of problems it can be of help.

I own the code

On the other hand if you own the code your life is just easier.

In this situation, you’ll likely to have an optimized binary in production that can’t be used for reading the core dump. If this is the case the thing you can do is to compile the same source code without the optimizations and then use the debugger to read the dump file along with it.

Things are so clear, bt is showing that main.go broke at line 34 leading to a panic, let’s see what happened, the problem seemed to be at frame 4 (the 4 in the backtrace), so I can print the source of that frame:

Wow! That’s a panic, I wrote it so that the program would crash if a timeout occurs, well done program.

Nice, there where six goroutines, a few ones parked too

Between all those goroutines the one t hat seems interesting is the Goroutine 5, let’s see what’s inside:

When in the Goroutine 5, I can hook in the frame 4 to see the content of the messages and ch variables:

With GDB things are similar, but not that nice:

A notable point here is proc.go:1070 so I’ll dig into that frame, also it seems that there has been a panic after.

What I see is Go code but not mine. Also given that this is a dump of a specific state and not an interactive debugging session I cannot control the state so I can’t even inspect goroutines in such situation.

This creates a gdb.txt file in the current directory where I see that there’s a known variable I can try to print

However no luck in getting the right place in my own code where the panic occurred :/

The program runs in a Kubernetes cluster

In case your crashed program runs in a kubernetes cluster the good news is that you can just get your core dumps inside the machines and analyze them like if they weren’t containers (unexpected right?).

The bad news is that in case of a cluster with a number of nodes you will need some effort to understand on which node the process crasheed and the way to get the core dump may not be all that straightforward.

However the other good news is that there’s a pull request kubernetes/community#1311 to add a crd just to do that, seems magical!

In the past on this kind of distributed systems (prior to kubernetes), I was used to write a program to be used in /proc/sys/kernel/core/core_pattern that would write the dumps to a shared filesystem, usually NFS.